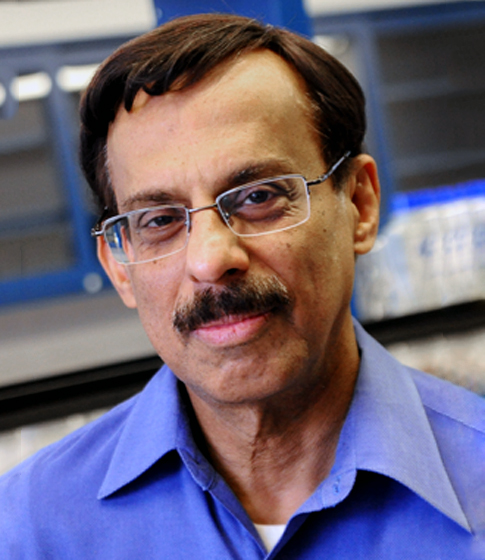 For over a decade of outstanding service to AIME as its representative on the joint engineering society Hoover Medal Board and on AIME's Council of Excellence.

Dr. Ponisseril Somasundaran received his M.S. and Ph.D. from the University of California at Berkeley and his Bachelor of Engineering from the Indian Institute of Science in 1961. Before joining Columbia University, he worked for the International Minerals and Chemical Corporation and Reynolds Industries. He was appointed the first La von Duddleson Krumb Professor in the Columbia University School of Engineering and Applied Science, and the first Director of the Langmuir Center for Colloids & Interfaces, and founding director of the National Science Foundation Industry/University Cooperative Center for Advanced Studies in Novel Surfactants. He was also elected Chairman of the Henry Krumb School at Columbia University, as Chair of Dept. of Chemical Engineering, Material Science & Mineral Engineering in 1992 and 1995.

He was inducted in 1985 into the National Academy of Engineering, among the highest professional distinction that can be conferred to an engineer and later to the Chinese, Indian and Russian National Academies. He is the recipient of the Antoine M. Gaudin Award (1982), the Robert H. Richards Award (l987), the Arthur F. Taggart Award for best paper (1987) of AIME, "Most Distinguished Achievement in Engineering" award from AINA among others. In addition, he was awarded the "Ellis Island Medal of Honor" in 1990, along with such recipients as President George Bush, four former Presidents, U.N. Ambassador Thomas Pickering and Danny Thomas, the Leadership citation from the New Jersey Senate in 1991, and the Engineering Foundation’s 1992 Frank F. Aplan Award.

He has been honored in many countries. He was appointed as an Honorary Professor at the Central University of Technology of China, 1988-1993, and an Honorary Research Advisor at the Beijing Research Institute of Mining & Metallurgy, Beijing, China, in 1991 and a Plenary Lecturer at many International conferences.

He is the author/editor of fifteen books and of over 700 scientific publications.