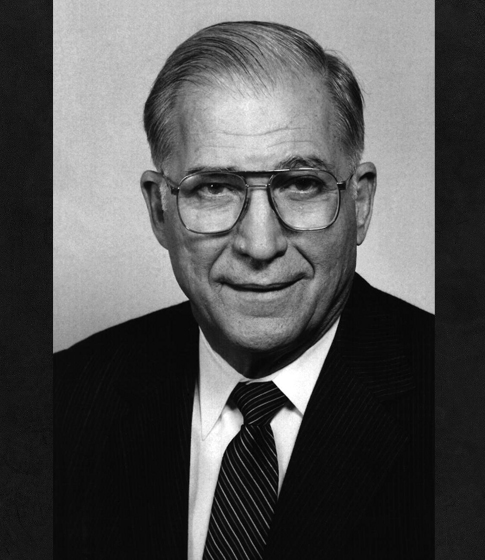 In recognition of many years of exemplary and dedicated service as an AIME representative to the United Engineering Trustees, including service as a UET Board and Executive Committee member, and Chairman of the Real Estate Committee.

John E. Frost is President of Frost Minerals International. He earned a B.S. 1n Mining Engineering from Stanford University in 1949 and subsequently earned his M.S. and Ph.D. in Geology, also from Stanford . After beginning his career with Asarco in 1951 as a geologist. he moved to the Philippines in 1954 as Chief Geologist and Surface Mines Superintendent. He returned to the United States in 1960 to continue graduate studies for his Ph.D. He joined Duval Corporation in 1961 as Chief Geologist where he established and managed a successful exploration organization. In 1967 he was employed in the same capacity by Exxon to design, build and manage major domestic and international minerals exploration programs. In 1980. as Senior Vice President of Exxon, he combined these two programs into one of the largest in the world. Dr. Frost left Exxon in 1986 and established his own consulting and exploration company.

A member of the Society for Mining. Metallurgy and Exploration. Dr. Frost is also a member of the Society of Economic Geologists. He served as the 1989 President of SEG and is a past President and current Trustee of the SEG Foundation. Dr. Frost became an AIME representative to the United Engineering Trustees Board in 1981 and has since served on the Salary Committee, Executive Committee, Nominating Committee and Real Estate Committee, which he chaired in 1987 and 1988. He has been elected the 1991 President of the UET. In 1983 he received the AIME Charles F. Rand Memorial Gold Medal and was named a Distinguished Member of SME in 1984.