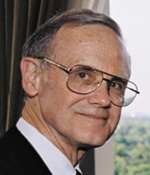 Dan K. Adamson retired as SPE Executive Director at the end of September 2001. As Executive Director, Adamson headed the staff management team that had responsibility for operations in the Societys four officesDallas, Houston, Kuala Lumpur, and London. Adamsons career with SPE spanned more than 35 years. He joined the SPE staff in January 1965, when the Societys membership stood at less than 15,000. He had seen the Society transition from a largely U.S.-based constituent society of the American Inst. of Mining, Metallurgical, and Petroleum Engineers to an organization with membership exceeding 51,000 in more than 50 countries. Adamson began as Assistant to the Executive Secretary, working in administration, student relations, continuing education, and special assignments. He became Editor and Publications Manager in 1967 and Assistant Executive Director and General Manager in 1968. Adamson was the Societys fourth Executive Director and had held the position since 1979. While Assistant to the Executive Secretary, Adamson played a major role in the conduct of a staff study that led to the founding of the Offshore Technology Conference (OTC), first held in 1969. OTC is managed by SPE on behalf of the events 12 sponsoring societies, including SPE. Adamson was initially Assistant Executive Manager of OTC and was responsible for OTC publications. He had been OTC Executive Manager since 1979. Adamson was a member of the Council of Engineering and Scientific Society Executives (CESSE) and the American Soc. of Assn. Executives. Adamsons CESSE activities included service as 1998 Annual Meeting Program Chairman, 199899 President, and 19992000 Nominations and Awards Committee Chairman. A native of Vernon, Texas, Adamson earned a BA degree in history from Southwestern U. in Georgetown, Texas.