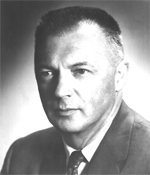 "In recognition of his distinguished educational leadership, inspiring teaching, and significant original contributions to knowledge in mining engineering."

Stefan Boshkov has been Chairman of the Henry Krumb School of Mines of Columbia University since 1967. He began his teaching career at Columbia in 1947, where he had also received both his B.S. and E.M. degrees from the School of Mines in 1941 and 1942.

In addition to his teaching career, Professor Boshkov has achieved wide recognition as an engineering and mining consultant. He has been an advisor or consultant to various county, state and federal agencies, including the Office of Technology Assessment of the United States Congress, the Department of the Interior and the Department of Labor.

Professor Boshkov has served as a U.S. representative on the International Organizing Committee of the World Mining Congress since 1962, and the International Strata Control Conference since 1960. He has been a member of the editorial boards of, or contributing editor to foreign mining magazines and several major encyclopedias, as well as being the author of over fifty articles. As an invited guest lecturer, he has traveled widely in the USSR, Spain, Chile, the Republic of China, Bulgaria, Bolivia, Poland and India.

A member of AIME since 1947, Professor Boshkov has served as a Director of the Society of Mining Engineers of AIME, as well as on numerous SME and AIME committees.