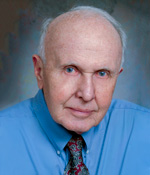 For his enormous contributions to teaching and research in economic geology and the legacy of accomplishments of his students to future generations.

Spencer R. Titley is a Colorado Native and was raised in Denver, and Eagle, where he worked on a ranch during WWII. His first taste of the future was driving tunnels in Cripple Creek and Idaho Springs gold deposits during vacations at Colorado Mines, where he graduated with the Geological Engineering degree – and an Army Commission - in 1951. His first professional employment was at Gilman, Colorado where he was a Junior Geologist in a job cut short by service with the Corps of Engineers in Korea. He returned to Gilman in 1953 and was ultimately Mine Geologist before leaving to attend Graduate School at the University of Arizona in 1955. There, he received his Ph.D. with studies in geology and chemistry and resumed geological work in the southwest in exploration geology. He re-entered the Academic world at the University of Arizona in 1960.

Teaching and research were occupations during following decades.. His focus is, teaching economic geology and ore deposits at many scales from microscopic to the geology of regions. He his has taught several thousand students over a period of more than 50 years in the classroom and field, and he has been advisor and principal mentor to 135 graduate students in field and laboratory studies related to Economic Geology. Over the decades, he has taught many geologists the techniques of field investigation on field trip bases. During summers and leaves he has worked as a teaching consultant with many peoples in many lands on many kinds of ores. His published research in books and peer-reviewed papers concerns mostly base and precious metal deposits in lands and islands of the Pacific Rim. He was a Fulbright Senior Lecturer in Brazil. He has published the results of numerous lunar mapping projects as a part time employee of the USGS and member of the Apollo Field Geology Investigation Team.

Recognition comprises awards of the Medal for Distinguished Achievement from the Colorado School of Mines in 1975, the Penrose Gold Medal of the Society of Economic Geologists in 1996, the D.C.Jackling Award of SME in 1997, and the Medal of Merit of the American Mining Hall of Fame in 1997 – and he is a member of the Legion of Honor of SME He has numerous awards for professional achievement and teaching from Colleges, Departments, and professional organizations, and he has presented many Distinguished Lectures and he is past President of the Mining Foundation of the Southwest. He was elected to the National Academy of Engineering in 2005 and has served on National Research Council Committees. In 2013, he was still teaching resource and economic geology to full classes at the University of Arizona.