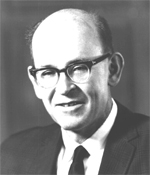 "His research, his publications and his successful students have made his name synonymous with modern day nonferrous extractive metallurgy."

Reinhardt Schuhmann, Jr. is the David Ross Distinguished Professor of Engineering at Purdue University, a position he has held since 1964.

Dr. Schuhmann's first teaching and research activities were in mineral dressing, and are reflected in publications on flotation chemistry, flotation kinetics, and size distribution of comminution products as well as process developments for Bolivian tin ores and South African uranium ores. While teaching at the Massachusetts Institute of Technology until 1954, he pioneered the unit process approach, now familiar to several generations of students through his textbook, "Metallurgical Engineering". He conducted many researches on the thermodynamics of metallurgical processes, with particular attention to copper smelting. Most recently, he collaborated with Dr. Paul Queneau in the invention of the Q-S oxygen smelting process for nonferrous metal concentrates.