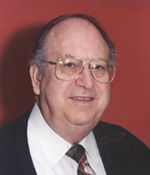 In recognition of the inspiration given by his enthusiastic, effective teaching and creative research in extractive metallurgy and for his interest and contributions to the professional advancement of his students and colleagues.

Milton Wadsworth’s brilliance reached far beyond the walls of his research laboratory. While an internationally recognized pioneer in new approaches and understanding in extractive process metallurgy, it is the lives and careers that he touched with his warmth, intellectual generosity, and adventurous spirit that serve as his true legacy to materials science and engineering (MSE), as well as society as a whole. He passed away in January at the age of 90.

“His influence extended to all dimensions of life and was not limited to the Butler-Volmer equation, to activation energies, or to absolute reaction rate theory,” said Jan Miller, Chair, Department of Metallurgical Engineering, University of Utah, in his eulogy honoring Wadsworth. “Milt was able to communicate the beauty of metallurgy and science to the general public. He was an excellent spokesperson for science and all who listened benefited from his wisdom and understanding.”

The focal point of Wadsworth’s professional life was the University of Utah (UoU), where he earned both his B.S. in metallurgical engineering and a Ph.D. in metallurgy, and then continued to build a 45-year academic career, starting as an assistant professor and eventually being named a Distinguished Professor of Metallurgy in 1983. He also held a number of administrative positions at UoU, including two separate terms as Department of Metallurgy chair, Utah Mining and Minerals Resources Research Institute director, and College of Mines and Earth Sciences dean. He joined TMS in 1947, was named a TMS Fellow in 1976, and served as TMS President in 1983 and AIME (American Institute of Mining, Metallurgical, and Petroleum Engineers) President in 1991. His numerous awards and honors include four AIME best paper awards, the 1978 James Douglas Gold Medal, and TMS-AIME Honorary Membership in 2009.

While most known for his research interests in hydrometallurgy, Wadsworth also contributed to the understanding and progress of many other topics, including flotation, cementation, roasting, oxidation of metals, electrochemistry, thermodynamics, and kinetics.

“Milt took a different approach to understanding the reactions that were occurring in extractive process metallurgy,” said Ray Peterson, Director of Technology, Aleris International, and 2009 TMS President. “Mining and mineral processing was a relatively old field, but the fundamental processes were not very well understood or quantified. He studied many processes at a fundamental level and then built mathematical models that described the reactions. He brought a new rigor to the description of processes.”

“Milt recognized years ago the power that computational modeling could bring to engineering and he encouraged its application in hydrometallurgy and other fields as well,” added Garry Warren, University of Alabama Professor and 2011 TMS President. “I sometimes wonder what he could have accomplished if he had at his fingertips our current computational tools.”

Wadsworth’s list of professional accomplishments could have filled volumes, but Warren noted that he was a modest individual who valued the people around him most. This was particularly evident in his relationship with his students and the small army of young MSE professionals that he mentored through the years.

“Milt was so much fun to sit down and talk with, especially when I was a graduate student,” recalled Warren. “That is something I have tried to emulate with less success. He could so easily speak to students about technical topics in ways that were not only humorous but elucidating.”

“Dr. Wadsworth showed me how to be a good leader through listening and caring,” echoed Peterson. “No matter how busy he was with his research or his duties as college dean, he would listen to his students and give advice whenever asked. Also due to his involvement in TMS, he stressed the importance of being active in your professional organization, both for your own improvement and for the betterment of your profession. I would not be involved in TMS to the extent I have been without his early encouragement.”

“Without his example, I sincerely doubt that I would have become or wanted to become TMS President,” agreed Warren.

In addition to his professional contributions, many of Wadsworth’s friends and colleagues cherish the stories and memories of a man who embraced all that life had to offer. This includes his service during World War II as a U.S. infantry officer; his marriage of 69 years to his wife, Mirian and devotion to their six children and 19 grandchildren; and his love for big motorcycles, fast cars, and tap dancing.

Peterson, for one, recalls an experience from his graduate school days  that highlighted both Wadsworth’s talent and his personality: “The graduate students decided to have a group social dinner where students from each country were responsible for bringing a food item that represented their country. After dinner, different students performed music or skits to entertain everyone else. To our amazement, Dr. Wadsworth told us he would like to perform. Little did we know that, as a young man, he had learned to tap dance. He laced up his tap shoes and gave an impromptu performance. He amazed us with his speedy footwork and grace. Imagine our shock at watching the dean of the college dancing away with no regard to his studious professional image. We learned then that it was all right to show your fun side.”

Editor’s Note: The University of Utah Metallurgical Engineering Department established the Wadsworth Endowed Scholarship on the occasion of Milton Wadsworth’s 90th birthday in 2012. Contributions are now being accepted in his memory at http://www.metallurgy.utah.edu/people/Wadsworth_endowed.php.