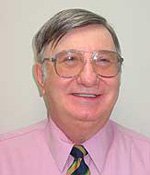 In recognition of his life-long dedication to research, his innovative approaches to teaching and technology transition, and his significant original contributions to knowledge in mine design using computer simulation tools.

Sturgul's area of expertise is mine design using computer simulation models, about which he has consulted and lectured worldwide. He has pioneered this technique and designed more mines worldwide using computer simulation techniques than any other known individual. His models allow mining engineers to view the mine in cartoon motion on the computer screen, manipulate with varying data to pose the "What if?" questions, and see the results on the screen before costly decisions are made. He has worked on both underground and surface coal mine projects in China, Siberia, Venezuela, Spain and the U.S.; modeled gold mines in Canada and Papua New Guinea; diamond and platinum underground mines in South Africa; underground salt mines in the U.S.; and a major underground gypsum mine in Iowa. He also has conducted work for large surface iron mines in Minnesota. The mining engineer helped design a giant open pit copper mine in Chile, which is the largest of any kind of mine in the world -- six times larger than any previous copper mine -- as well as the largest gold mine in the world, a surface mine in Peru. His mine model in Papua, New Guinea was the first example of a mine being totally designed from scratch using computer simulation techniques. His work has taken him to over 60 countries, including Australia, China, Spain, Peru, Chile, South Africa, Argentina, Brazil, Canada, New Zealand, Ukraine, Poland, Russia, Bulgaria, Romania, Greece, England and, most recently with a grant from the United Nations, to Tanzania, East Africa. He has lectured and presented short courses in these and other countries. He has received honorary membership in the Chilean Institute of Mining Engineers, the only American to have been so honored. He also has received high honors from universities in Spain, Peru, Siberia, Romania, Greece, Russia and lastly in Australia, where he was a Fulbright Senior Scholar. A native of Hurley, Wisc., Sturgul was elected to the Geological and Mining Engineers Hall of Fame at Michigan Technological University, Houghton, Mich., where he earned a bachelo's degree in 1961. He earned a maste's degree from the University of Arizona in 1963, and a doctoral degree from the University of Illinois in 1968. He has taught at UI for 13 years, written three textbooks including one on mine design and several hundred professional publications. He has presented the keynote lectures at various international conferences. He was elected to the Mining and Metallurgical Society of America, the America Society for Mining Engineers and the Society for Simulation International. He co-edits an international mining journal and helps plan several international mining symposia.