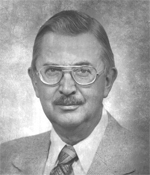 For his inspiring teaching of many successful extractive metallurgists, and for distinguished and effective professional representation of mineral industry education to government and industry.

Albert W. Schlechten is Director of the W.J. Kroll Institute for Extractive Metallurgy at the Colorado School of Mines. He received his BS degree in metallurgical engineering from the Montana School of Mines and his ScD degree from the Massachusetts Institute of Technology.

He taught at the University of Minnesota and Oregon State College before joining the U.S. Bureau of Mines, where he assisted in the development of a commercial process for the production of zirconium metal. He then returned to teaching and was Chairman of the Department of Metallurgical Engineering at the Missouri School of Mines for seventeen years before resigning to become Head of the Department of Metallurgical Engineering at the Colorado School of Mines in 1963. In 1968 he was appointed Vice President for Academic Affairs, and in 1971 was promoted to his present position.

In addition to his teaching duties, Dr. Schlechten serves as Director of the Institute for Extractive Metallurgy at the Colorado School of Mines. He is the author of numerous papers on extractive metallurgy and is a contributor to the Encyclopedia Britannica for articles on mining and metallurgy.