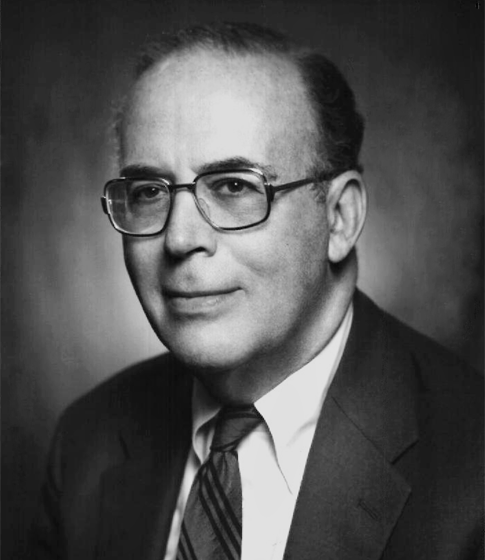 In recognition of the immense contribution he has made as an industrialist, government official and educator, toward increasing public understanding of the role of minerals and the economic factors requisite for their production, not only in peacetime, but also in World War II, and subsequent national emergencies.
Deceased: 1998

Simon D. Strauss had no peer as an authority on the world’s metals markets. From the 1920's onward, Simon observed the ebbs and flows of the markets through prosperity and depression, through war and peace, and through inflation and deflation. During his many years as an Asarco executive, Simon’s market analysis and opinion were sought by the industry, by its customers, by the market place, by journalists, and by governments; literally, by all who sought to understand the market’s complexity.

Simon Strauss was born in Lima, Peru, the son of a mining engineer. At the young age of 16, he joined Engineering and Mining Journal as a news and markets reporter and remained with the magazine for five years. After a stint as Editor of the Madison, New Jersey Eagle, Simon went to work for the Standard Statistics Co. as a financial analyst in 1935. In 1941, he joined the Reconstruction Finance Corp. and subsequently became a Vice President and Director of Metals Reserves Company, the government corporation that handled war-time procurement of some 87 strategic metals and minerals.

After the war, Simon Strauss joined ASARCO Incorporated, where he rose to the position of Vice Chairman in 1977. During his Asarco years, Simon often placed his war-time experience at the service of his nation. He was a frequent witness at Congressional hearings. During the Korean war, he was a consultant to the Defense Materials Procurement Agency.

Simon Strauss was elected to leadership positions in, and honored by, numerous industry organizations, among them: the Lead Industries Association, the Zinc Institute, the Copper Club, the Silver Institute, the American Bureau of Metal Statistics, the International Copper Research Association, and the International Lead-Zinc Research Organization. Simon was one of the Founders and a Life Member of the National Mining Hall of Fame and Museum and the first Chairman of its Board of Governors.

Simon Strauss was very generous with his knowledge. He repeatedly devoted precious time to explaining the industry’s complexities to young professionals. He loved young people and in his post-corporate career, lectured on mineral economics at MIT, Penn State, Columbia, the Universities of Arizona and California, and the Colorado School of Mines. He wrote prolifically about the markets and in 1986, published a book, “Trouble in the Third Kingdom,” that analyzed the status and supply of metals and other minerals.