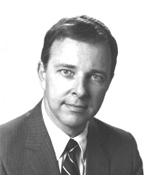 "In recognition of his contribution to the understanding and resolution of worldwide mineral supply-demand issues, to the introduction of improved steelmaking technology and lo global planning on metals and minerals."

Lindsay D. Norman was named the ninth President of Montana College of Mineral Science and Technology in July, 1986. He was educated at the University of Maryland, where he earned a B.S. in Metallurgy in 1960, an M.S. in Metallurgy and Nuclear Engineering in 1964 and a Ph.D. in Materials Science and Physics in 1970. Prior to accepting his current position at Montana Tech, Dr. Norman was Vice President and Technical Director of The Chase Manhattan Bank in New York City and Vice President of Jones & Lauglin (LTV) Steel Corp. In 1979 he was appointed by the President as Director of the U.S. Bureau of Mines.

Dr. Norman has received numerous awards including the U.S. Silver Medal, The Patriotic Service Award, and the Distinguished Alumnus Award from the University of Maryland. A recipient of a Presidential Commendation, Dr. Norman has chaired numerous national commissions and has frequently testified before the Congress and spoken before many national audiences as an expert on mining, metals. and energy issues. He has written many published articles on mining, environmental, and Strategic minerals supply/demand topics. Dr. Norman's expertise has been recognized through frequent consulting assignments for the United Nations, several foreign countries, private corporations, and the Congress.