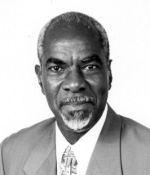 In recognition of his sustained and distinguished service to the field of taxation policy in the petroleum industry. He has played a significant role to ensure fair methods and practices of taxation in the natural resource industry such that both the host country and foreign multinational companies are appropriately compensated. AIME recognizes him for his contributions at the highest administrative and policy-making levels, both in the public and private sectors, in the field of mineral economics.

John P. Andrews is the current chairman of Atlantic LNG company of Trinidad & Tobago. An accountant by training, he is considered one of the foremost exponents of petroleum industry taxation in Trinidad & Tobago. He was in a large measure responsible for the design and successful implementation of the legislation for a separate regime for the taxation of the petroleum industry in 1974. He was the first head of the Oil Audit Section of the Inland Revenue Division and a member of the Permanent Petroleum Pricing Committee. Mr. Andrews has held numerous government positions; he was executive director of the Technical Advisory Group and chairman of the Trinidad Tobago Oil Company. He is a graduate of the International Tax Program of the Harvard Law School. Mr. Andrews holds directorships on several boards of financial institutions and manufacturing enterprises and was awarded the natio's second highest honour, the Chaconia Gold Medal for long and meritorious service to Trinidad & Tobago.