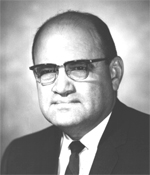 "For major contributions to the understanding of energy economics, especially coal; for the bringing of professional economics inputs into a major state Geological Survey; and in recognition of his outstanding and unique contribution to the Council of Economics of AIME."

Hubert E. Risser, a mining engineer and mineral economist, had been a special advisor and assistant to the Director of the United States Geological Survey since 1971. For the 16 years prior, Dr. Risser served as Mineral Economist with the Illinois State Geological Survey. During most of the 1960's, he also held the rank of Professor of Mineral Economics in the Department of Metallurgy and Mining Engineering at the University of Illinois.

Dr. Risser received a degree as a mining engineer from the Colorado School of Mines in 1937 and earned a master's degree there in 1953. He was awarded a doctoral degree in economics at the University of Kansas in 1956.

Dr. Risser was the author of numerous scientific and technical publications and articles dealing with the economic aspect of minerals and mineral fuels. He was selected by the Society of Mining Engineers of AIME to participate in the AIME Henry Krumb Lecture series in 1972. Dr. Risser recently served on the Editorial Committee for the third edition of the book, "Economics of the Mineral Industries", published by AIME.