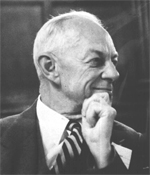 In recognition of exceptional contributions to the field of mineral economics through the organization and editing of 'Economics of the Mineral Industries', the first volume broadly and completely to cover the widely varied aspects of that discipline, and through his leadership over many years in formulating programs and publishing on this subject.

Edward H. Robie was born at Whitney Point, N. Y., November 30, 1886. A graduate of the University of Michigan, he received a degree in chemistry in 1911. After two years in his first job as a chemist, he moved to the mining industry by joining the Canadian Copper Company in Ontario.

In 1919 Robie entered the publishing field as a member of the staff of the Engineering and Mining Journal in New York. He became acting editor, and editor of Metal and Mineral Markets, the Journal's weekly supplement reporting market prices. In 1931 he became editor of Mining and Metallurgy, the AIME journal. For 16 years he wrote a two-page monthly department for the magazine. He edited "ThePorphyry Coppers in 1956" and organized and edited the "Economics of the Mineral Industries" and later revised that volume. He retired in 1955, after serving as secretary of AIME since 1948.