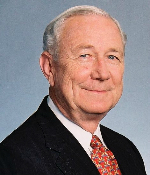 In recognition of distinguished service to the petroleum industry in the realm of hydrocarbon reserves and economics, including significant contributions to the SPE/WPC Petroleum Reserves Definitions and subsequent revisions and expansions. He has worked tirelessly to educate both practicing engineers and the general public on reserves calculation and classification matters.

Mr. Harrell is a Petroleum Engineering graduate of Louisiana Tech University and continues as Chairman Emeritus of Ryder Scott Company, LP.  He relinquished the CEO position in 2005 and retired as Chairman in May 2006.

Ron remains active in the industry in several capacities and serves on 6 Boards of Directors  including corporations, universities and not-for-profit organizations. He is a Senior Advisor to RSK(UK)LTD.

Past SPE awards include the Legion of Honor (2007), Gulf Coast Section Reservoir Description and Dynamics Award (2007), SPE Distinguished Member Award (2007). He served as a Distinguished Lecturer in 2007-2008 delivering 34 lectures in 17 countries.