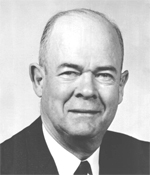 "In recognition of leadership in the field of mineral resources and of a distinguished career in the U.S. Bureau of Mines, during which he successfully directed his talents toward an improved understanding and appreciation of minerals and mineral economics in our society."

Charles White Merrill worked as a mucker, miner, shift boss, surveyor, geologist, chief sampler, and mine superintendent in mines and oil fields of the western United States and Mexico for four years after leaving Stanford University in 1923 with degrees of AB in geology and EM in mining.

In 1928, he entered duty with the United States Bureau of Mines in Washington, D.C. and San Francisco as a mineral economist. Mr. Merrill was made chief of the division of minerals in 1955, a position he still holds. He served in the Tank Corps in World War I and was commissioned a Captain, Specialist Reserve, in the U.S. Army, 1931-42.

Mr. Merrill has prepared many articles and papers on mineral economics, statistics, mining practice, and related subjects. He had a principal part in advancing the Minerals Yearbook from a one-volume to four-volume presentation; developing the AIME volume, "Economics of the Mineral Industries"; initiating the Bureau of Mines "Mineral Facts and Problems" series; and establishing the Materials Surveys series.

He served on all U.S. delegations to Tin Study Group meetings between 1947 and 1952, and on the U.S. Tin Mission to Malaya in 1951. In 1960, he headed the U.S. delegation to a SEATO mineral resources meeting in Tokyo.

The Mineral Economics Award was established June 18, 1965. It is bestowed on a person in honor of distinguished contributions to the advancement of mineral economics. The A ward consists of a suitably engrossed Certificate of A ward containing a citation of the service or achievement upon which the award is based. The recipient of the award may be invited to deliver a lecture as a part of the Annual Meeting of the Institute.