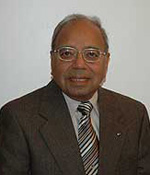 A member of SME since 1966, Dr. Ramani has served on more than 40 SME and AIME committees. He was the chairman of the Coal Division in 1987 and is currently a member of the SME Board of Directors. Dr. Ramani is also involved in a number of other professional activities and has served as a consultant to several agencies Inc luding the U.N. , U.S. Department of Labor, and U.S. Department of Energy on safety, productivity. training and management aspects. The recipient of several awards, Dr. Ramani was named a Distinguished Member of the SME in 1989.