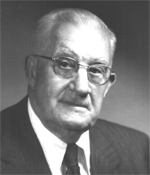 "An outstanding member of the mineral industry whose more than one hundred and.fifty publications in geology and geochemical journals have provided invaluable aid to the clay industry."

Dr. Keller began his career as an Instructor at the University of Missouri in 1926. After a brief period as a ceramic technologist with the A. P. Green Fire Brick Company, he returned to the University of Missouri, serving as Assistant, Associate, and Professor during the years 1932 to 1970, and from 1941 to 1945 was Chairman of the Department of Geology. He then became Professor Emeritus, and from 1970 to 1973 served as Visiting Professor of Geology at the University of South Florida. In 1970 he was Principal Investigator of the NASA Lunar Research Program. He became Visiting Adjunct Professor at Texas Tech. in 1978. As a consultant, he has done extensive work on fire clays, domestic and foreign. He is currently a working member of the International Committee on Correlation of Age and Genesis of Kaolin.

Dr. Keller is a member of AIME and a number of other professional organizations. He is the recipient of several awards, including the Outstanding Educator of America Award and the Neil A. Miner Award of the National Association of Geology Teachers. A distinguished lecturer, Dr. Keller is the author of five books, four encyclopedia articles, and numerous papers published in scientific journals.