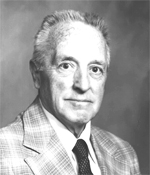 Editor-in-Chief of Industrial Minerals and Rocks, fourth and fifth editions. Author of Handbook of World Salt Resources, and other industrial mineral publications.

Mr. Stanley J. Lefond holds B.S. and B.M.E. degrees in mining engineering from the University of Alaska and an M.S. degree in mineralogy from the University of Michigan. He formed his own consulting company in 1974, servicing corporations and individuals in the field of industrial minerals and economic geology.