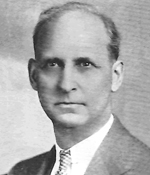 "An indefatigable worker, a most kindly man and warm friend to all, for his signal service in the field of industrial minerals."

Oliver Bowles was born in Northern Ontario in 1877. He graduated from the University of Toronto in 1907. Here he developed an enthusiasm for quarrying which drew him to the United States. For two years he served as an instructor at the University of Michigan and at the University of Minnesota for another two years. In 1914 his U. S. citizenship was established and he became Quarry Technologist in the U. S. Bureau of Mines. In 1918 his title was changed to Mineral Technologist. His career with the USBM was a long and honorable one. When the Bureau established a nonmetallic minerals experiment station at New Brunswick, N. J. in 1923, Dr. Bowles was detailed there as superintendent.

Asbestos was a commodity of consuming interest to Dr. Bowles and his list of publications on the subject is impressive. The Annual Reviews he prepared for the Bureau on various other nonmetallic minerals were always in demand. He eventually was made Chief of the Division of Nonmetallic Mineral Economics and headed a constantly expanding staff. Compulsory retirement was reached at seventy but for many years he continued on "Special Assignments."

In 1922, Dr. Bowles received a Ph.D. from George Washington University. He became a Member of AIME in 1914. He was a charter member of the Mineralogical Society of America; a member of the Society of Economic Geologists and Honorary Member of the British Institute of Quarrying. In 1943, he received the Distinguished Service Award of. the U. S. Interior Department for his outstanding career as a specialist on nonmetallic minerals.