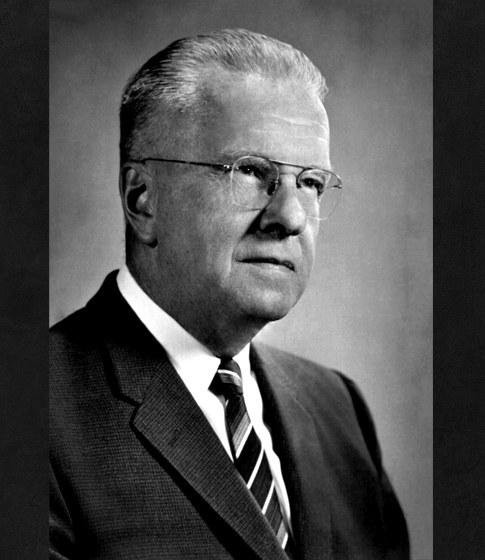 "Eminent mining engineer and author; for his penetrating studies of a broad range of industrial minerals and their processing in his native Canada and overseas."

Monosn Fraser Goudge joined the Canadian Department of Mines in 1923, after graduating in mining engineering from Nova Scotia Technical College in 1921. He remained with the Department until 1958, actively engaged in work on various industrial minerals. As well as authoring monographs on stone and magnesia resources of Canada, he has authored many technical papers and reports on a wide variety of industrial minerals.

In 1930, he discovered rock suitable for the manufacture of rock wool in Canada. Mr. Goudge made the first rock wool in Canada and was responsible for the industry's establishment there. Later he discovered large deposits of brucitic limestone in Ontario and Quebec and developed and patented a commercial process to recover pure magnesia and lime therefrom. He was awarded the gold medal of the Professional Institute of the Public Service of Canada for work 'on rock wool and the Blaylock Gold Medal by The Canadian Institute of Mining and Metallurgy for work on brucite and other industrial minerals in 1953. In 1957 he was presented with the McCharles Prize by the Board of Governors of Toronto University for having developed a commercial process for the production of magnesia.

Near the end of World War II he spent four months in Europe for the Canadian Government reporting on new developments in enemy science and technology relating to industrial minerals.

Early in 1958, Mrs. Hal Williams Hardinge contributed a fund to establish this A ward in memory of her late husband, a prominent member of AIME. It consists of a Plaque appropriately engraved with the name of the recipient and the Citation in his honor. The Award recognizes "outstanding achievement in the field of industrial minerals" and is presented at the Industrial Minerals Division Luncheon.