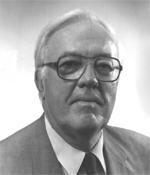 "For outstanding contributions to the mineral industry as research scientist, educator, author, lecturer, and business executive; particularly in the field of clay technology."

Haydn H. Murray is chairman of the department of geology at Indiana University. Prior to accepting this position in 1973 he was executive vice-president of the Georgia Kaolin Company in Elizabeth, New Jersey, which he had joined in 1957 as director of research.

Upon separation from service in the armed forces in 1946, Dr. Murray entered the University of Illinois where he received his B.S., M.S. and Ph.D. degrees in geology. He held the Illinois Clay Products Fellowship in Clay Mineralogy in 1949 and 1950. Dr. Murray has published some fifty papers and holds two United States patents.

In 1971 Dr. Murray received the New Jersey Ceramic Association Man of the Year Award for his outstanding contributions to ceramics. At present he is chairman of the executive committee of the UNESCO Working Group on Kaolin Genesis.