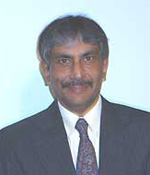 Dr. Nagaraj obtained his Doctorate from Columbia University in Mineral Engineering & Applied Surface Chemistry in 1979; M.Sc in Electro-hydrometallurgy and B.Eng (Metallurgy) from Indian Institute of Science in 1974 and 1972; and B.Sc (Chemistry) from Bangalore Univ, India in 1969. He joined American Cyanamid (now Cytec Industries) in 1979, and is currently Research Fellow at Cytec. His main focus at Cytec is Research and Development of new reagents for the mineral industry. He has received many special recognition awards and three major awards, most notably the Mining Lantern Award for outstanding career contributions at Cytec, and twice the Circle of Excellence awards for specific scientific achievements. In 1997 he was promoted to the position of Research Fellow in recognition of his long time achievements as a scientist and a technologist. He has a strong background in organic/analytical/coordination chemistry, minerals processing, hydrometallurgy, water-soluble polymers, surface and colloid chemistry, applied electrochemistry, and Statistics/experimental design. He is well known in the industry for his expertise in the area of flotation reagents, plant process diagnostics and problem solving, and in fundamental chemistry aspects of mineral separations. He holds 20 patents has published 65 papers. Nagaraj has mentored over 25 summer interns and university exchange students. Nagaraj is well known in both the industry and the academe. He has successfully transferred fundamental knowledge to practice. He has served on several doctoral dissertation committees. In addition to presenting his work in the academic circles, he has lectured extensively in most of the major mineral processing companies around the world. Dr. Nagaraj has more than 25 years of outstanding and innovative achievements in the design, development and commercialization of numerous families of novel flotation reagents and in advancing the art and science of flotation agents. They include collectors, depressants, dispersants and others for sulfide and non-sulfide mineral separations. He has also developed many organic and polymeric complexing agents for the removal of toxic metals from effluents and process streams. He has conducted many workshops in the industry on a variety of minerals processing topics, and particularly on the fundamental and practical aspects of flotation reagent chemistry and applications. One of his notable contributions to the field of flotation reagents has been in bringing a rational scientific basis for reagent design for mineral separations. He is well known for his pioneering work in the use of SIMS surface analysis technique to solve many long-standing problems in minerals processing plants. He used the Insights gained from these studies to develop new flotation reagents. Nagaraj has also written several popular papers with a highly critical analysis, and these have served to dispel the myriad misconceptions in flotation practice and to provide practical guidelines for plant operators. Recently he developed a holistic approach to reagent selection and optimization in flotation. The concepts developed are applicable to many complex mineral processing systems. He has been an active member of SME since 1974. He is a member of the MPD Executive Committee. He has actively served in the MPD Fundamentals Committee for 15 years; was Chairman of this committee in 1998; has presented papers, organized and chaired sessions regularly at SME, and in International conferences. He has also participated in many regional SME meetings. He introduced many new sessions in the SME annual meetings with a view to bridge the gap between fundamental research and practice. He served on the Taggart Award committee. He is a regular reviewer of papers for M&MP, IJMP, Minerals Eng, Colloid & Surface Sci. Nagaraj was a regular contributor for many years to the Annual Review issue of Mining Engineering.