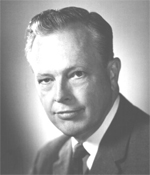 In recognition of his outstanding record of distinguished service to the Society of Petroleum Engineers and A1ME, his professional leadership through many years of the technological evolution of the petroleum producing industry, and his devotion to cimc responsibility and professional ethics.

Robert B. Gilmore is senior chairman of the DeGolyer and MacNaughton board of directors in Dallas, Texas. A petroleum engineering graduate of the University of Tulsa, Mr. Gilmore is a Fellow of the American Association for the Advancement of Science and a former member of the Energy Resources Committee of the Interstate Oil Compact Commission and the American Gas Association Exploration Task Force. He was also instrumental in the organization of the Engineers Club of Dallas and served as the club's first president in 1951.