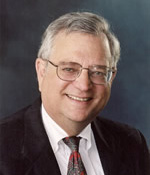 For his technical contributions to his field of expertise and for his dedicated service to SPE.

Kenneth E. Arnold is founder and President of K Arnold Consulting. He has more than 40 years of industry experience, including 16 years at Shell. Arnold founded Paragon Engineering Services in 1980, which was purchased by AMEC in 2005. In September 2007, he retired from AMEC and formed K Arnold Consulting. He is recognized for innovative contributions to the design of and problem solving in offshore facilities as well as substantial involvement in SPE at both the section and international levels. Arnold is coauthor of two textbooks and more than 50 technical articles on project management and facilities design. He has twice been chosen as an SPE Distinguished Lecturer and is the editor of the Facilities and Construction Engineering volume of the Petroleum Engineering Handbook. Arnold was SPE’s first Technical Director for Projects, Facilities and Construction. He was elected to the US National Academy of Engineering in 2005, was named 2003 Houston Engineer of the Year by the Texas Society of Professional Engineers, is a member of the Marine Board of the National Research Council, and is on the Board of the Academy of Medicine, Engineering, and Science of Texas.