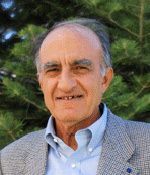 In recognition of 35 years of dedication and distinguished service in advancing the technology of petroleum engineering, especially in the area of reservoir engineering; and for contributions and service to SPE and the engineering profession.

He obtained both his B.S. and Ph.D. in petroleum engineering from the University of Texas in 1961 and 1963, respectively. After obtaining his Ph.D., he went to work for Sinclair Oil Company's Production Research Laboratories, where he worked in the areas of transient testing, reservoir simulation, and applied mathematics. He joined Marathon Oil Company in 1969.

He is a member of many technical societies, has more than 39 publications, and given numerous talks and seminars. He has received several honors and is an Honorary Member of AIME. An active member of SPE, he has served on numerous committees.