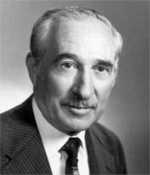 Henry J. Gruy is Chairman of the Board of Gruy Engineering Corporation in Houston, Texas, which he organized in 1950. Mr. Gruy received B.S. and professional degrees in petroleum engineering from Texas A&M University. Prior to forming his own company, he was a petroleum engineer and geologist with DeGolyer and MacNaughton and Shell Oil Company.

Long active in the Society of Petroleum Engineers, Mr. Gruy served as SPE President in 1968, on the Boards of both SPE and AIME, and as an AIME Vice President in 1969. During 1965 -1966, he was SPE Distinguished Lecturer on oil-industry accounting methods. In 1983 Mr. Gruy was named an SPE Distinguished Member. Mr. Gruy is a fellow of the Texas Academy of Science and is a registered professional engineer in Texas.