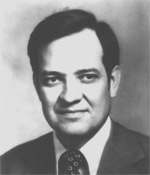 For more than a quarter century of numerous and noteworthy contributions that have markedly enhanced standards of the petroleum engineering profession; for work encompassing all aspects of SPE programs, from fiscal and intersociety activities to major achievements in developing global programs; and for quality and tireless pursuits that have benefitted the Society's membership and furthered its mission.

Charles L. Bare is Manager, Headquarters Operations, Exploration Production, Russia, for Conoco Inc. in Houston. After he was graduated from the University of Oklahoma, Mr. Bare began his petroleum engineering career with the Magnolia Petroleum Co. in 1954. He joined the Continental Oil Co. in 1961 and has held numerous managerial positions since. He currently serves as vice chairman of the International E&P Forum, an organization that represents the upstream industry and related environmental, safety and operating practices to governments and other interested parties.

Since the late 1970's Mr. Bare has taken major initiatives to extend SPE programs worldwide. He was key in the formation of the biennial SPE/U.S. DOE Symposium on Enhanced Oil Recovery He guided the establishment of SPE Europe as an organization to represent SPE's interest in the United Kingdom and throughout Europe, Africa, and the Middle East and was also the major representative in securing the SPE interest in the Offshore Europe Conference and Exhibition in Aberdeen. Mr. Bare has served as a member of both the AIME and SPE Boards and was President of SPE in 1979. An SPE Distinguished Member and recipient of the SPE Distinguished Service Award, Mr, Bare was elected to AIME Honorary Membership in 1992.