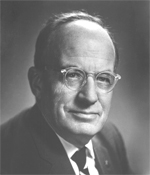 Joseph Lincoln Gillson was born in 1895. He graduated from Northwestern University in 1917, receiving the degree of B.S. in geology with the highest distinction.

World War I interrupted his scholastic education. During that period, he served in the United States Navy, making fourteen round trips to France on the transport George Washington. During three of these crossings, President Woodrow Wilson was aboard. After the war he returned to Northwestern and was awarded an M.A. in geology. Continuing his education, he attended Massachusetts Institute of Technology where he obtained an M.S. in 1921 and a D.Sc. in 1923, both in geology.

The span of activities of Dr. Gillson covers a wide and varied field but notwithstanding the scope, the results of his efforts always were successful.

In 1921, he was an instructor of Mineralogy at Harvard University. From 1924 to 1929 he served successively as instructor, assistant professor, and associate professor in the Department of Geology at M.I.T. During the first four years of his teaching period he also served as junior geologist for the U. S. Geological Survey. In 1929, he left the field of teaching and joined the du Pont Company in Wilmington, Delaware. As geologist for that company, he has made explorations in search of sulphur, ilmenite, fluorspar, barytes, celestite, and other raw materials, as well as investigations of ground water supplies, foundation problems and general site studies. In 1940 he served as special geological adviser in India.

He served as Chief Geologist for du Pont until his recent retirement and is now carried on the rolls of that company as a consultant.

In 1947, Dr. Gillson was Chairman of the Industrial Minerals Division of AIME.

In 1957, Dr. Gillson received the Jackling Award for "his significant contribution to the advancement of economic geology, his leadership, his keen sense of professional responsibility." As if his scientific and executive career were not sufficient, Dr. Gillson is a recognized author and editor. He has written over thirty authoritative papers in the geological and mineralogical fields and devoted many arduous months to being Chairman of the Editorial Board for the Third Edition of "Industrial Minerals and Rocks," recently published by AIME.

Concurrent with his editorial duties, he accepted the herculean task of being Chairman of the Member Gifts Committee of AIME for the New Engineering Center. In this, as in all of his assignments, he has given unstintingly of himself and his time.

No biography of Joe Gillson, however brief, could omit mention of his constant companion, Grace, whom he married in 1918 and whose charm is known to many in AIME. They have three children and four grandchildren.

AIME is proud and fortunate to have Dr. Gillson as its leader.