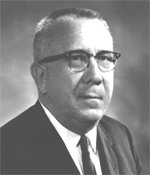 For vision, leadership and management skills which have led to the development of significant new mineral resources.

William Page Morris is president and a director of the Duval Corporation of Houston, Texas. During his 38-year career in mining, he has given unselfishly of his time and talents to numerous associations.

Mr. Morris received his degree in mining engineering from the Colorado School of Mines in 1930. He began his mining career a year later with Valier Coal Company in Valier, Illinois. In 1932 he joined United States Potash Company in Carlsbad, N. M. and stayed until 1940, worked first as an underground motorman and later (1934-1940) as a safety and haulage engineer.

Mr. Morris is a director of The Sulphur Institute, the American Potash Institute, Inc., and the New Mexico Mining Association. He was the 1962 recipient of the Distinguished Achievement Award of the Colorado School of Mines.