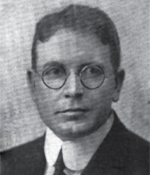 For unusual administrative ability, demonstrated as chief executive of a major steel company for many years, and for far-reaching vision which led him to promote the development of electrical equipment in such industries as steel, shipbuilding, and gold mining. much of which he personally designed.

During World War I he was also consultant to the U. S. Navy in the design of electrical equipment for submarines and other naval vessels. In 1920 he joined the Steel and Tuhe Co. as executive engineer. In 1923 he was consulting engineer for the Colorado Fuel and Iron Co. and the Inland Steel Co. He was appointed assistant General Superintendent of the Indiana Harbor plant of the latter in 1927, and in 1930 was assistant to the president. Mr. Sykes was Director of AIME and later Vice-President from 1935 to 1941. He was President from 1941 until 1949, when he became Chairman of the Executive Committee and of the Finance Committee, retiring from active service at the end of 1953.