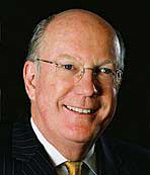 For his leadership of the gold mining sector in promoting social responsibility and sustainability as the Chairman and CEO of Newmont Mining Corporation.

Wayne W. Murdy was elected Newmon's Chief Executive Officer in January 2001, and became Chairman of the Board effective January 1, 2002. Headquartered in Denver, Colorado, Newmont is the worl's largest gold producer with a market capitalization at year-end 2005 in excess of $23 billion, total assets in excess of $12 billion on five continents, and 14,963 employees worldwide. Mr. Murdy is a Director of Qwest Communications International, Inc. and TransMontaigne Inc. He is a member of the Board of Trustees of the Denver Art Museum, the University of Denver Daniels College of Business Executive Advisory Board, the Manufacturing Council of the U.S. Department of Commerce, and The Catholic Foundation of Denver. He is also Chairman of the International Council on Mining and Metals, and a Director of the National Mining Association. Prior to joining Newmont in 1992, Mr. Murdy spent 15 years in senior financial positions in the oil and gas industry, first with Getty Oil Company and later with Apache Corporation. He began his business career with Arthur Andersen LLC in their Los Angeles office. A graduate of California State University at Long Beach, he has a Bachelor of Science Degree in Business Administration and is a Certified Public Accountant. Mr. Murdy was recognized as a distinguished graduate of California State University at Long Beach in 2005. Wayne and Diana Murdy have been married 37 years and have four children and six grandchildren.