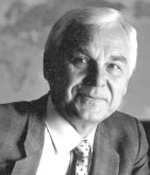 For inspirational leadership, superlative administrative skills and innovative accomplishments, that resulted in increased efficiency, productivity and worker health and safety in mines and metallurgical operations throughout the world.

Walter Curlook. CM, BASc, MASC, PhD, DSc(hon), FCAE, Peng, management consultant, is Distinguished Adjunct Professor, Department of Materials Science and Engineering, University of Toronto. He spent his entire professional career in the mining and metallurgical industry, working for INCO where he started out in research and development, and subsequently worked at all levels including president and CEO of Inco Metals Company, vice chairman and director of Inco Ltd, and lastly as president and director general of Goro Nickel SA. An inventor with some 15 process patents, he directed his concerted inventiveness to bulk mining concepts and automation, and process improvements, which have made the industry eaSier, safer, more productive and environmentally sounder both in the workplace and externally. He received various honorary distinctions, notably being invested with the Order of Canada in 1996, and being inducted into the Canadian Mining Hall of Fame in 1997.