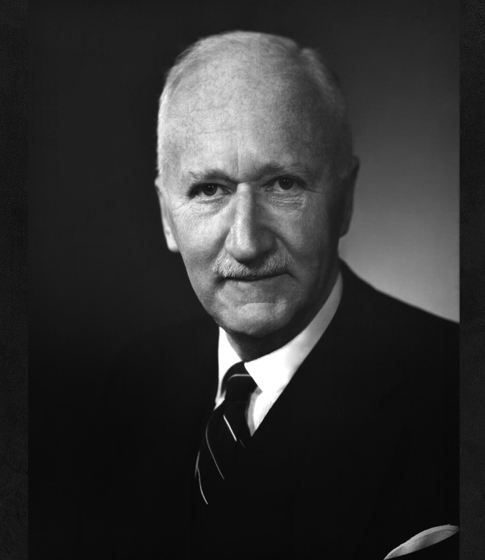 In recognition of his leadership in guiding the expansion of a famous Peruvian mine into an international industrial company with diversified raw materials interests.

Robert P. Koenig was born in New York City in 1904. He received an A.B. from Harvard in 1924. From the Montana University School of Mines he received an honorary degree of Doctor of Engineering in 1958.

Since he joined Cerro de Pasco Copper Corporation in 1925, Mr. Koenig has risen steadily to an imposing list of Board memberships, as Chairman, President, or Director. Among a host of other companies, he is currently Director of Magma Copper Company, Berwind·White Coal Company, New River and Pocahontas Coal Company and Atlantic Cement Company.

Since 1950, he has been President of the Cerro Corporation. In this post, he has concentrated on modernizing, improving and expanding the South American operations of this company. Under Mr. Koenig's guidance, the corporation launched into a comprehensive and varied program resulting in the addition of seven nonferrous metal fabricating units as well as including aluminum and cement industries.

From 1942 to 1945, Mr. Koenig served with the Corps of Engineers, U. S. Army overseas, where his activities included Central and North Africa, and the Mediterranean and European Theaters of Operations. Promoted to Colonel in 1944, his last assignment was as Chief of Solid Fuels Section, Supreme Headquarters A.E.F'. (General Eisenhower's Staff).

Mr. Koenig was appointed representative of the U. S. Bituminous Coal Industry to the Coal Mines Committee, International Labor Organization in London, Geneva and Pittsburgh, Pa. He was Temporary Special Assistant to the U. S. Ambassador to the United Kingdom in 1947. These are but a few of the many important appointments conferred upon him.