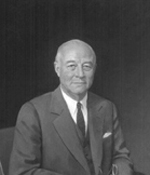 For constructive leadership in establishing great enterprises for the production of iron ore, of steel, and of coal; for signal success in the administration of large organizations engaged in these industries so vital to the economy of our country.

The third outstanding mining executive to receive the Charles F. Rand medal since it was established in 1927 is George Magoffin Humphrey, president of M.A. Hanna Co. and chairman of the board of Pittsburgh Consolidation Coal Co., largest producer of bituminous Coal in this country.

M.A. Hanna Co. and Pittsburgh Consolidation Coal Co. are large factors in American industrial life. The former and its subsidiaries own extensive iron ore properties in the Lake Superior district and in a normal year ship seven to eight million tons of high-grade iron ore to be smelted in the blast furnaces near the lower Lake ports. Pittsburgh Consolidation Coal Co. owns and operates 35 deep mines and eight strip mines in Pennsylvania, West Virginia, and Kentucky with an average annual output of 20,000,000 or more tons of bituminous coal.