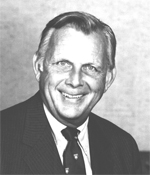 For inspirational leadership and management skills brought to the minerals and construction industries resulting in the founding and successful administration of Mountain States Mineral Enterprises.

Mr. Frohling has been recognized in the southwest for having, through Mountain States, which employs more than 800 people, helped to boost the local economy, and through his own personal contributions and involvement in the community, helped provide incentives for economic growth in the immediate area.

A Director of the Society of Mining Engineers of AIME, Mr. Frohling was named a Distinguished Member of the Society in 1979. In 1975, he received the Distinguished Citizen Award of the College of Mines and the Alumni Association of the University of Arizona, and the same year was named "Man of the Year" by the Tucson Advertising Club.