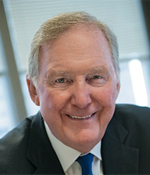 For his years of leadership in talent development in the oil and gas industry, the founding of two successful companies; International Human Resources Development Corporation recognized as a world leader in training for the oil and gas industry, and the Arlington Group for private natural gas development, and for his contributions to the initiation of the SPE competency system.

Dr. David A. T. Donohue is the Founder and President of both IHRDC and Arlington Storage Corporation. He is a technical specialist, businessman, attorney and lecturer who is highly regarded for the teaching of management programs devoted to the business of oil and gas. He has successfully designed and taught these "business simulation" programs to more than 10,000 members of the international oil and gas industry on both in-house and public bases. He was the developer of an innovative video-based learning system for the upstream petroleum industry, which has now been converted to IPIMS, a widely licensed e-Learning system. Dr. Donohue is also the developer and former owner of independent underground gas storage facilities in New York State. In his early career, he held various positions in engineering and research for Exxon and, for four years, served on the faculty of Pennsylvania State University. Dr. Donohue holds the Ph.D. in Petroleum & Natural Gas Engineering from Pennsylvania State University and a J.D. degree from Boston College Law School. He holds elective office and is active in public affairs in his hometown, a Distinguished Member of the SPE, Alumni Fellow of Pennsylvania State University, and Alumnus of the Year Award from Boston College Law School.