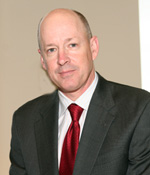 For leading Glamis Gold through a period of unprecedented growth, culminating in its merger with Goldcorp, Inc. to form a major precious metals mining company.

Mr. McArthur has over twenty years of experience in the resource industry and most recently was appointed President and Chief Executive Officer of Goldcorp, one of the worlds largest gold mining companies. Prior to that, Mr. McArthur held the position of President and CEO of Glamis Gold from 1999 until its merger with Goldcorp in November 2006. Mr. McArthur joined Glamis in 1988 where he served in a variety of management positions including Vice President of Chemgold Inc, President of Glamis Rand Mining Company and Chief Operating Officer of Glamis Gold Ltd. Prior to joining Glamis, Mr. McArthur was a Mine Engineer with BP Minerals North America and Homestake Mining Company. Mr. McArthur holds a Bachelor of Science degree in Mining Engineering from the University of Nevada.