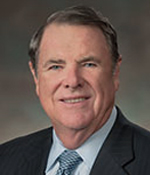 "For his contribution in restoring the American steel industry's international competitiveness."

Thomas J. Usher is chair of the board and chief executive officer of USX Corporation.