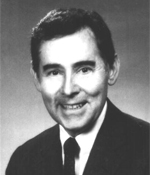 "In recognition of his significant contributions in the development of steelmaking techniques for deep drawing steels and his long term commitment to advancing technology in steel production."

Dr. Boni is presently serving as Director on the boards of Armco and North Carolina Central University Foundation. He is a member of the Board of Trustees of Carnegie-Mellon University. A recipient of the University of Cincinnati Distinguished engineering Alumnus Award in 1970, Dr. Boni is listed in American Men of Science and Who s Who in America.