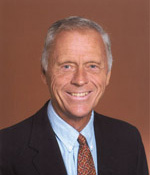 "For his many contributions to the physical chemistry of steelmaking and bis tireless efforts to improve the technical foundation of the steel industry."
Deceased: 2022

Richard J. Fruehan is a professor in the department of materials science and engineering at Carnegie Mellon University. He received his BS and PhD degrees from the University of Pennsylvania and was an NSF post-doctoral scholar at Imperial College, University of London from 1966 to 1967. He then was on the staff of the United States Steel Laboratory until he joined the faculty of Carnegie Mellon as a professor in 1980.

Dr. Fruehan organized the Center for Iron and Steelmaking Research, an NSF Industry/University Cooperative Research Center, and is currently the Director. The Center now has 24 industrial company members from the US. Europe, Asia South Africa and South America. He has authored more than 150 papers, two books and co-authored two other books and is the holder of five patents. He has received several awards for his publications including the 1970 and 1982 ISS/AIME Hunt Medal, 1982 and 1991 ISS/AIME John Chipman Medal, 1989 TMS/AIME Mathewson Gold Medal, 1993 ASM International Albert Sauveur Award 1976 Metals Society UK Gilcrist Medal, 1996 ISS-AIME Howe Memorial Lecturer, and he also received an IR1000 Award for the invention of the oxygen sensor.

Professor Fruehan is a Distinguished Member of the Iron & Steel Society and served as its president from 1990-1991. In 1997 he was appointed the US Steel professor of the Materials Science and Engineering Department of Carnegie Mellon University.