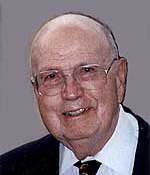 In recognition of 64 years of loyal and dedicated service to AIME and the Iron & Steel Society, serving as the first President of ISS and showing untiring support for the Society since its formation twenty-six years ago.

Melvin E. Nickel is president of Melvin E. Nickel and Associates, Inc., which offers consulting services to the iron and steel industry. He received his BS degree in metallurgical engineering from the University of Missouri at Rolla in 1938 and began his steelmaking career with Bethlehem Steel. In 1939 he joined Wisconsin Steel, then a division of International Harvester Company.

Starting as a practiceman in the Blast Furnace Department, he progressed through various positions of responsibility until 1960 when he headed the investigation of the use of oxygen in steelmaking. He was responsible for the design and construction of the new oxygen steelmaking facilities and of the development of operating practices. Subsequently Mr. Nickel became Superintendent of Basic Oxygen Furnaces, Manager of Steel Production; Manager of Primary Operations including the operational responsibility for the Coke Plant, Blast Furnaces, Basic Oxygen Furnaces, and Continuous Casting; in 1975 he assumed his present position.