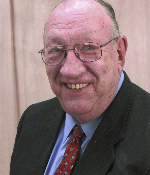 For exceptional and selfless leadership and service to the American steel industry through his successful industrial career and extraordinary contributions as president of ISS (AIST), AIME and the ISS Foundation.

Leonard Nelson retired after a 40-year career with Republic Steel Corp. and the merged company LTV Steel. He earned a B.S. degree at Muskingum College in 1958 and attended the Advanced Management Program at the University of Michigan in 1975. Mr. Nelson concluded his career in 1999 as general manager and assistant plant manager of LTV Steel’s Cleveland Works. He joined Republic Steel Corp. in 1959 as a technical trainee in Warren, Ohio, and then transferred to Cleveland in 1976 as superintendent of melting. With the merger of Jones & Laughlin and Republic (LTV Steel), he was named general superintendent, Cleveland Works, responsible for the plant’s primary operations. Mr. Nelson has 40 years of experience in open hearth, BOF, primary operations of melt, cast and rolling operations. He is a Life Member of AIST, was honored as a Distinguished Member in 2004, and was president of the Iron & Steel Society (ISS, a predecessor organization) in 1998. He was also president of the ISS Foundation in 1996–1998. Mr. Nelson served on the board of the American Institute of Mining, Metallurgical, and Petroleum Engineers (AIME) and was its president in 1997.