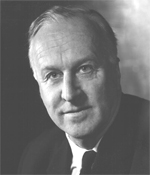 "In recognition of scientific and technological contributions in the development of steel plant refractories, design of furnaces and analyzation of flow patterns of gases and fluids."

John Hugh Chesters is President of the Institute of Fuel (U.K.) and until 1971 was Director of the Corporate Laboratories of the British Steel Corporation.

Mr. Chesters graduated in physics from the University of Sheffield in 1928. In 1931 he was awarded his Ph.D. and in the same year continued his research at the Kaiser-Wilhelm-Institut filr Silikatforschung in Berlin. After studying at the University of Illinois from 1932 to 1934, he returned to Britain to take charge of the refractories section of the newly-formed Central Research Department of the United Steel Companies Ltd. In 1945 he was awarded the degree of Doctor of Technical Science at the University of Sheffield for his research on refractories. At this time he became Assistant Director of Research of the Research and Development Department of the United Steel Companies, and later Deputy Director. In 1970 he became Director of the Corporate Laboratories of the British Steel Corporation, retiring from the Corporation in 1971.

Dr. Chesters received the AIME Robert Hunt Award in 1951. In 1969 he was made a fellow of the Royal Society and in 1970 was awarded the Order of the British Empire.