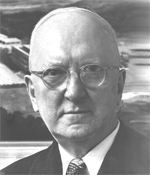 "For distinguished contributions to the steel industry and the nation through his concept and development of free cutting steels, oil well steels, and tank armor plate."

Mr. Graham graduated from Lehigh University in 1914 with degree in electrical and metallurgical engineering. He joined Jones & Laughlin Steel Corporation the same year and served the company in various operating technical and executive capacities before being named director of research and technology in 1947. A member of the corporation's executive committee and board of directors, he retired in 1956.

While serving with the War Productions Board and as a steel consultant to the Office of Production Management, Mr. Graham was influential in helping Sweden, Nationalist China, and several South American countries develop their steel production. A world traveler, he was on intimate terms with many world leaders including Chiang-Kai-skek. During World War II he held the rank of colonel in the U.S. Army.

Mr. Graham was co-founder and senior past-president of the Industry Research Institute. He was considered among his industry colleagues as the "guiding spirit" in the early development of the acid Bessemer and basic oxygen steel process.