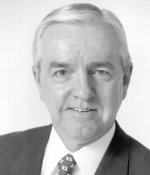 "For his energetic and innovative leadership and his application of advanced methods in the manufacture of steel."

Gordon E. Forward was elected President and Chief Executive Officer of Chaparral Steel in 1982. Prior to assuming this position, he was Executive Vice President-Production at Chaparral.

Before joining Chaparral, Dr. Forward was Senior Research Engineer for the Steel Company of Canada and General Superintendent for the Lake Ontario Steel Company. He is also a Director of Co-Steel International of Toronto, which is the owner of Lake Ontario Steel Co., Sheerness Steel Co., and Raritan River Steel Co. He earned a doctorate in Metallurgy from the Massachusetts Institute of Technology and a B.S. from the University of British Columbia in Vancouver. In 1986, Dr. Forward became a director of the Steel Service Center Institute of the United States. and is currently serving as President of the Gifted Students Institute Texas. He has been a member of the Iron and Steel Society for a number of years.

Dr. Forward was a co-recipient of the 1972 John Chipman Medal from The Metallurgical Society for basic research relating to the solidification of steel. He was chosen as the Howe Memorial Lecturer by the Iron and Steel Society in 1985. More recently, he was named a distinguished alumnus by M.l.T. and received the M.l.T. Corporate Leadership Award in 1987.