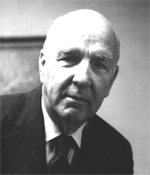 For his outstanding leadership in the national and international affairs of the steel industry and his foresight in modernization of steelmaking through new technology.

Mr. Stinson. who holds a J.D. degree from Columbia University, was admitted to the New York Bar in 1939 and served as legal assistant to the Presiding Judge of the Tax Court of the United States in Washington, D.C. In 1946, he joined the New York City law firm of Cleary, Gottleib, Friendly and Hamilton, remaining with the firm except for a two year period in 1947-48, when he served as a special assistant to the Attorney General of the United States.

Active in the affairs of the American steel industry, Mr. Stinson served two years as Chairman and Chief Executive Officer of the American Iron and Steel Institute, and from October. 1975 to October, 1977, served as Chairman of the International Iron and Steel Institute, an organization, headquartered in Brussels, which represents the Free World steel industry. In 1970-71, Mr. Stinson also served as a member of the President's Commission on International Trade and Investment Policy.

Mr. Stinson is the author of several books and treatises on legal subjects. He is a member of the Bar of New York State and of the District of Columbia, as well as the American Law Institute.