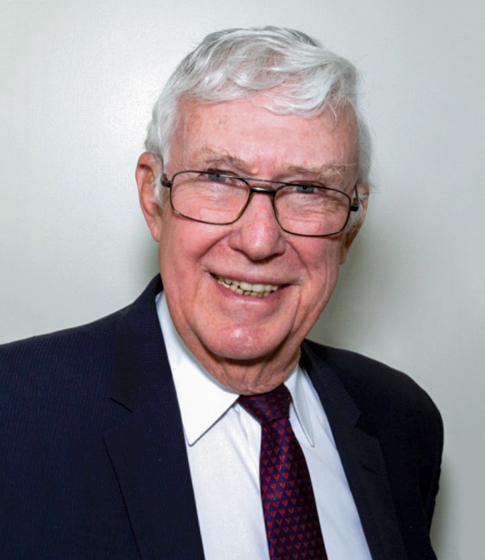 For his national and international leadership in ferrous physical metallurgy education, for his technical accomplishments that have advanced the overall understanding of steel microstructures and properties, and for his vision to develop successful industry-academic collaborations.

George Krauss is university emeritus professor at the Colorado School of Mines and a metallurgical consultant specializing in steel microstructural systems. He received a B.S. degree in metallurgical engineering from Lehigh University in 1955 and M.S. and Sc.D. degrees in metallurgy from the Massachusetts Institute of Technology in 1958 and 1961, respectively, after working at the Superior Tube Co. as a development engineer in 1956. In 1962–63, he was an NSF Postdoctoral Fellow at the Max Planck Institut für Eisenforschung in Düsseldorf, Germany. He served at Lehigh University as assistant professor, associate professor and professor of metallurgy and materials science from 1963 to 1975, and in 1975, joined the faculty of the Colorado School of Mines as the AMAX Foundation Professor in Physical Metallurgy. He was the John Henry Moore Professor of Metallurgical and Materials Engineering at the time of his retirement from the Colorado School of Mines in 1997. In 1984, Krauss was a principal in the establishment of the Advanced Steel Processing and Products Research Center, an NSF Industry-University cooperative research center at the Colorado School of Mines, and served as its first director until 1993. He has authored two books and edited or co-edited conference volumes on tempering of steel, carburizing, zinc-based coatings on steel, and microalloyed forging steels. He has published more than 330 papers and lectured widely. He presented the Edward DeMille Campbell Memorial Lecture of ASM International in 2000, the Howe Memorial Lecture of ISS in 2003, and the AIST Adolf Martens Memorial Steel lecture in 2010. Krauss has served as the president of the International Federation of Heat Treatment and Surface Engineering (IFHTSE), 1989–91, and as president of ASM International, 1996–97. He is Fellow of ASM International, TMS and IFHTSE. He is an Honorary Member of the Iron and Steel Institute of Japan, a Distinguished Member of AIST, an Honorary Member of ASM International and an Honorary Member of the Japan Institute of Metals.