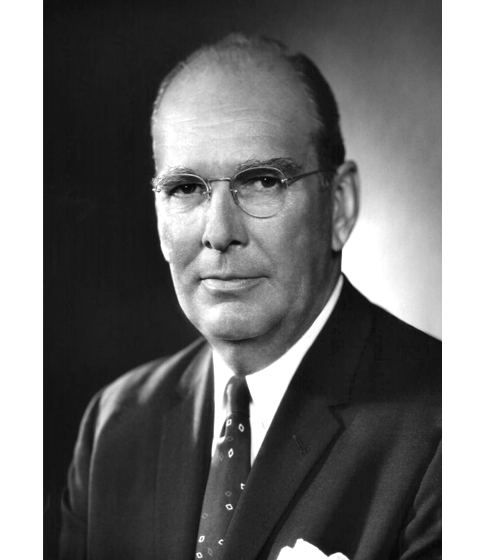 "An action-minded engineer and executive who has demonstrated extraordinary competence in strengthening the steel industry through advances in production technology, research and marketing."

Mr. Martin has been with Bethlehem Steel for nearly half a century. He graduated from Stevens Institute of Technology with a B.S. in mechanical engineering at the age of 19. The following day he joined Bethlehem's first "Loop Course," the corporation's management training program for college graduates.

His first job was as a repairman's helper in the roll shop of the Bethlehem, PA plant. In the succeeding years, Mr. Martin advanced to various supervisory positions in the company's Saucon Division. In 1946, he was transferred to Lackawanna, N.Y., and by 1950 was promoted to general manager. Under his direction, the Lackawanna plant increased its annual steel-making capacity from 3.6 million to 6 million tons, becoming the third-largest steel plant in the nation.

In January 1958, Mr. Martin returned to the home office in Bethlehem as vice president in charge of operations and a director of the corporation. Two years later, he was elected president, and in August 1963, he was elected vice-chairman. In April 1964, he was elected chairman and chief executive officer.

He is a former chairman and chief executive officer of the American Iron and Steel Institute and in 1969, received its Elbert H. Gary Memorial Medal. The Pennsylvania Society also awarded him the Gold Medal for Distinguished Achievement.

Honorary doctoral degrees have been conferred upon Mr. Martin by the University of Buffalo, Moravian College, Lehigh University, Stevens Institute of Technology, and Valparaiso University.