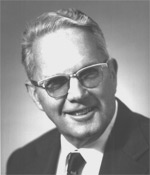 For practical contributions in development of waterflooding projects which have significantly increased the nation's oil recovery; and for distinguished service to professional and industrial groups.

R.C. Earlougher is Chairman of the Godsey-Earlougher Division of Williams Brothers Engineering Company. He holds the degree of Petroleum Engineer from the Colorado School of Mines.

After his graduation in 1936, Mr. Earlougher joined the Sloan & Zook Company, Bradford, Pennsylvania, where he moved into a position in charge of the company's core and water analysis laboratory. In 1938, he established his own business in Tulsa, Oklahoma, as an independent consultant and owner-operator of a production laboratory specializing in core and water analyses, with emphasis on improved oil recovery by fluid injection. He has been responsible for numerous water injection programs, and for the last 27 years has served as principal consultant to the City of Long Beach in the initiation and continued operation of water injection into the Tide- lands portion of the Wilmington Field.